Lots of cooking went on at the Spining household this past weekend. (Actually grilling to be more exact.) On Friday, my Dad grilled pizza on his Big Green Egg (yes, that’s the name of the grill); Sunday he grilled thin burgers since we’re always complaining (lovingly) that his burgers are too thick or too stumpy (Joanna Goddard from A Cup of Jo actually just did a post on thick vs. thin burgers) and I baked peach hand pies for dessert. The pies were sort of a last minute decision but I had been dying to make them. Everything turned out beautifully. Honestly, I’m surprised we cooked so much since we had such a busy weekend. Or I did at least… Sunday was my only free day sooo not much of a weekend for this girl. It’s all good though because this time next week I’ll be at the beach! Yes indeed we finally found a place and I’m so ready to get out of here for a week. I am a firm believer in vacations. I think everyone should take one at least once a year. Even if you just go to another city in your state, GET OUT OF TOWN!

Back to the recipes. So this pizza was very tasty. You wouldn’t think corn puree would be good on pizza but boy would you be wrong. This is quite possibly the best pizza I’ve ever had. I made my own little pizza too which was pretty fun. On Sunday, we bought Amy’s frozen All American Veggie Burgers, put some cheese on them, and threw them on the grill too. They were just as tasty as the beef burgers! We made enough to munch on throughout the week. Now about those hand pies…so so good. It was a lot of work and patience, but totally worth it. The recipe didn’t call for many ingredients which I liked. It kept the pies really fresh and on the healthier side…I guess. Without further ado: the recipes.

Both the burgers and pizza recipes were taken from Martha Stewart’s August issue of Living.

To make thinner burgers, you basically just need to roll out the meat with a rolling pin till they’re as thin as you like it. 70 percent lean meat mix is the key though. Ours turned out like this. 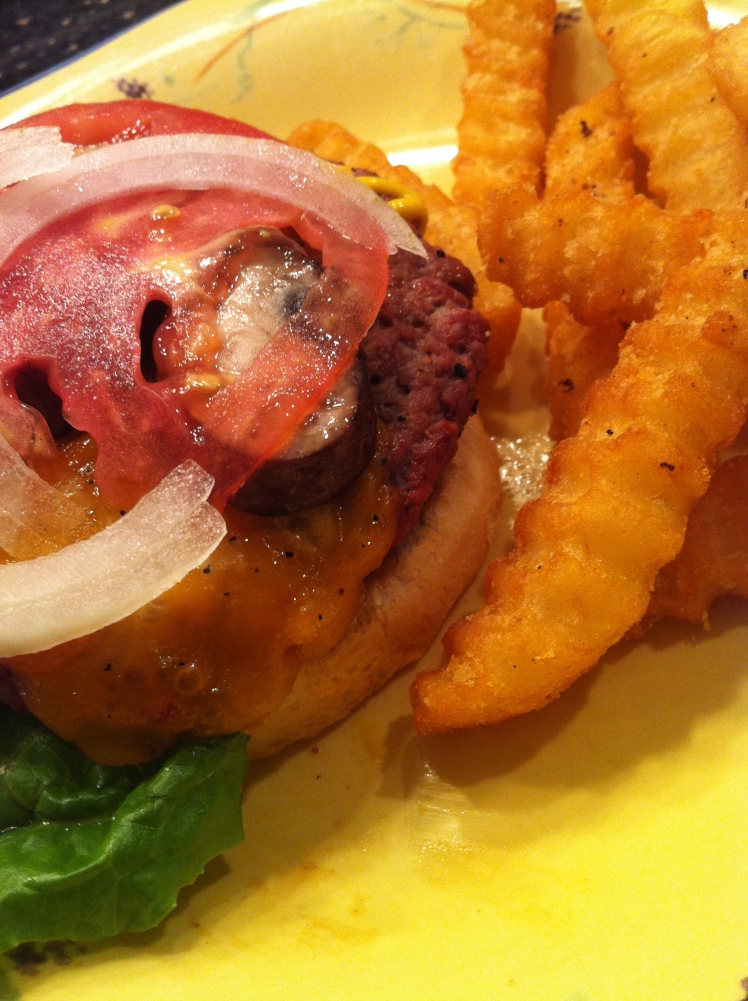 And the veggie burgers…

Unfortunately, I devoured the pizza for snapping some pics, but here is what Martha’s looked like. 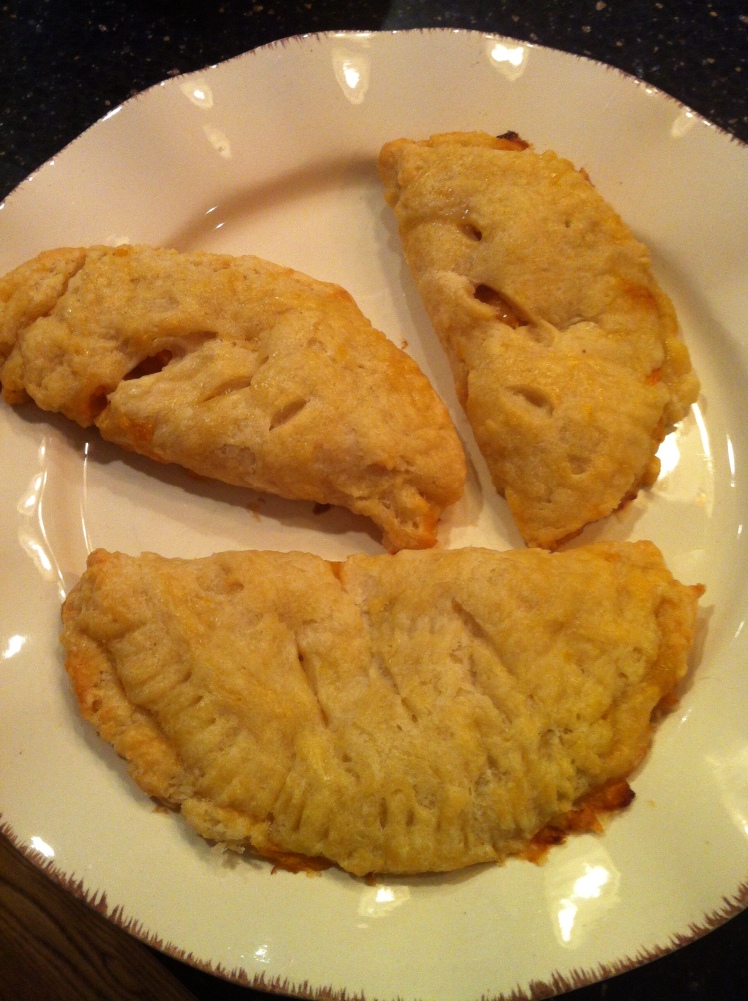 *Note: I actually cut all the ingredients in half since I didn’t want to make that many pies, but I’ve kept the original measurements in the recipe below to avoid confusion. This was taken directly from Macheesmo’s recipe. Many thanks to him! All of the below belongs to him (except the pictures, I took those.)

Raw sugar for topping the pie(s) 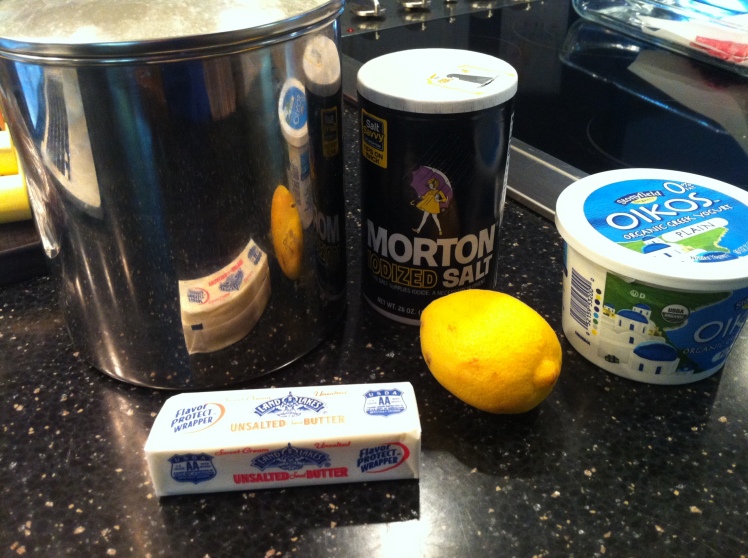 Start by mixing your dry ingredients (flour and salt) in a large bowl. Add your cubed cold butter (put it in the freezer for a few minutes even). Using your fingers, a food processor, or a pastry cutter, cut the butter into pea-sized balls.

I actually like using my fingers for this normally. Work quickly! You don’t want your butter to get too warm.

Once your butter is cut in, add your liquid and stir it together with a fork until the dough just comes together. Don’t overwork it!

Turn the dough out onto a counter top and form two even balls of dough. Wrap these in plastic and stick them in your fridge for at least an hour. You could make these the day before though and that would be even better!

I kept my version of the filling very standard. Just peaches. You could add a bit of mint or even, gasp!, bourbon to spice it up a bit. Start with nice fresh peaches!

There are two generally accepted ways to peel peaches. Take your pick. First, you can just peel them with a normal peeler. I find that this is the fastest way if you’re peeling under a dozen or so.

If you’re doing a lot of peach peeling though, you can also dunk them in boiling water for a few seconds and then the skins just slide right off the peaches!

Whatever method you choose, peel them and then chop them up into cubes and add your other filling ingredients.

Drain your peach filling in a colander or strainer for at least 10 minutes before using it.

You might think that it’s a travesty to lose those peach juices, but trust me, there’s plenty of residual juice in the peaches. All of that extra juice would just make your pies very runny and soggy.

Once you’re ready to make the pies, grab one of your dough balls out of the fridge and turn it out onto a lightly floured surface. [Keeping the dough cold is CRUCIAL! I chilled mine for the bare minimum, an hour, and when I rolled them out and cut the circles, they got messy after about 5 minutes. Lots of flour was used to keep them from sticking to the counter and rolling pin.]

Roll it out gently and slowly until you have a large disc. You should be able to work out a 12 or 14 inch wide disc of dough.

This might sound crazy, but after rolling the dough and cutting the dough and everything, your dough will be room temperature. You want to keep it cold. So put all your small circular rounds on a baking sheet lined with parchment paper and stick it in the freezer for about 15 minutes. This will chill it down again.

Finally! Time to make some pies. Take your rounds out of the ice box and add about 2 Tablespoons filling in the center of one. You want to make sure to leave yourself plenty of room to close the pie up. This is just about perfect. [I started with 2 tablespoons but when I folded the dough I ended up having to take some out.]

Brush the edges around the circle with a bit of egg wash and fold it over into a half-circle. Try to squeeze out as much air as you can. Next, use a fork to seal around the edges of the pie.

Then brush the top of the hand pie with more egg wash and sprinkle on some raw sugar if you have some. Also, cut a few slits in the top with a sharp knife.

Kind of a lot of work, but look at [these beauties]! 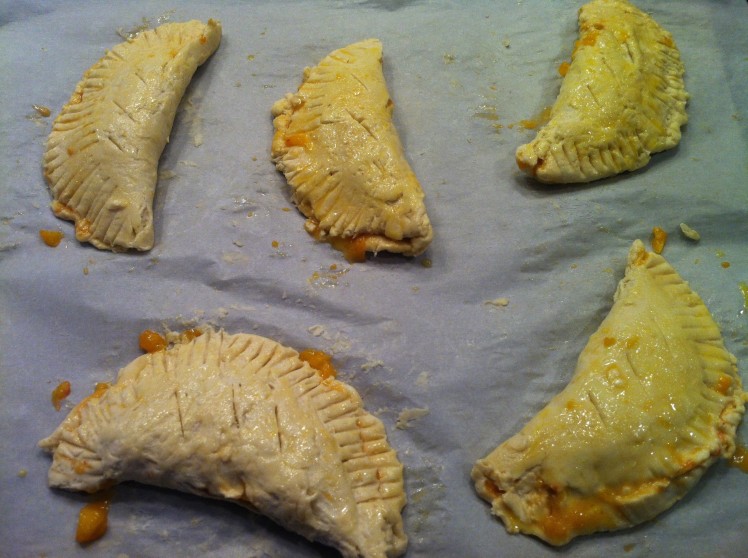 I know. Lots of chilling involved here. But the problem now is that your filling is room temperature. If you put this in the oven now, your filling will be boiling by the time your crust is cooked. In other words, your pie will explode.

So put your pies in the freezer on the same baking sheet lined with parchment paper for about an hour. This should basically freeze them solid.

Finally! Bake them in a pre-heated 350 degree oven for about 25 minutes. You can bake them on the same sheet you froze them on. They should be a nice golden brown color. [Mine took much longer to bake. More like 30 min. So time and heat could vary depending on your oven.] 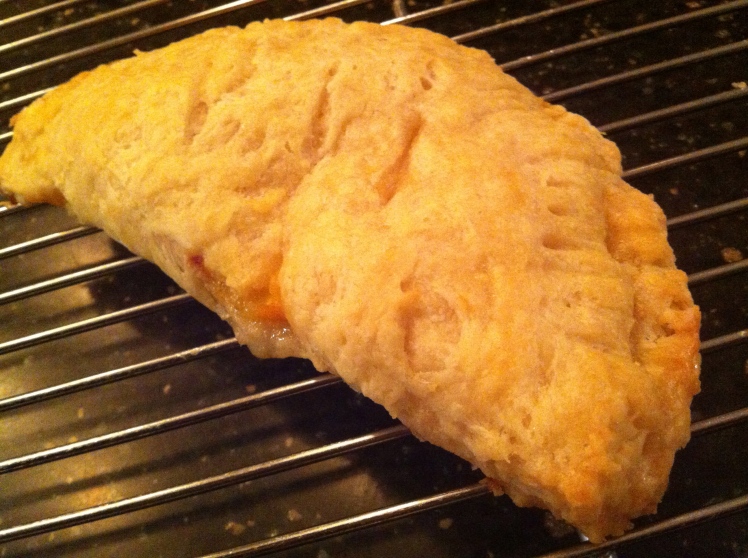 Let it cool for at least 15 minutes on a rack. Trust me. That filling is really hot and it’ll burn your mouth. Plus you want to give a chance for some of the sugars in the filling to set-up which means when you bite into the pie, everything will stay in place. 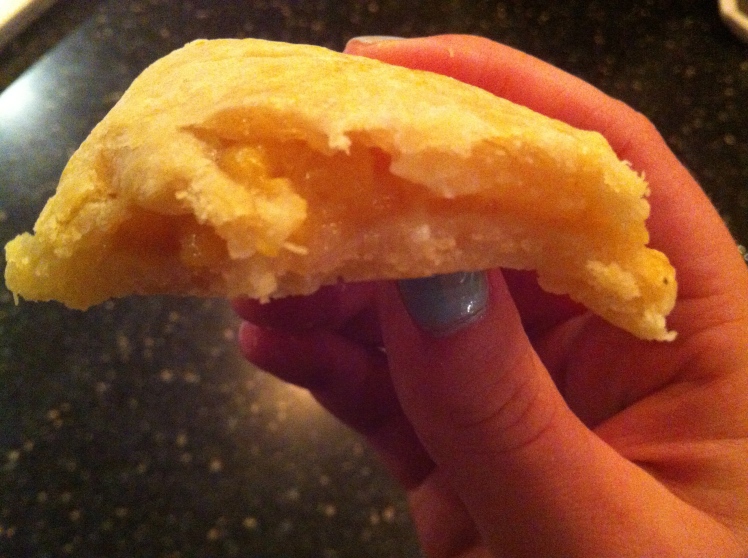 And voila! So so good. I’m tellin’ ya. Hope you all enjoyed this rather lengthy post. It was worth it though right?